Are You Looking for New Basement Windows?

A window well is semi-circular excavation that surrounds a basement window. It is typically constructed from a solid barrier made from corrugated galvanized metal, masonry, plastic or pressure-treated wood.
Window wells are usually installed for the following purposes:

Window wells are often covered to prevent falls, as well as to discourage small children, 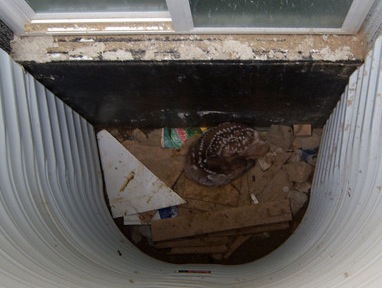 pets and wild animals from entering the wells and becoming trapped. For instance, a deer fawn made news in Bountiful, Utah, after it was recovered safely after falling down a 12-foot-deep uncovered window well. Covers will also prevent the accumulation of twigs, grass, mulch and blowing snow that would obscure sunlight and complicate emergency escape through the well. Covers may be locked from the inside to prevent unwanted intrusion.

Window well covers, however, can block sunlight, ventilation and emergency egress, especially if they become covered in snow and ice. It is the homeowner’s responsibility to make sure that the cover is cleared of snow and has not been frozen shut from ice. No items, such as garden hoses, potted plants or tools, should be placed on top of window well covers. Note that covers that are locked from the inside to prevent unlawful entry will be inaccessible to fire crews and first-responders.

“From start… To finish”

See more of our news and projects on our blog!

LAWRENCE CONSTRUCTION BUILD A BEAUTIFUL BOLD TILED SHOWER! We don’t hire a subcontractor to come in and do our tile work for us. […]

ARE YOU READY FOR A KITCHEN TRANSFORMATION? Let Lawrence Construction transform your kitchen with a renovation or rebuild in the Regina, Estevan, […]

BASEMENT RENOVATION DONE BY THE LAWRENCE CONSTRUCTION TEAM! Lawrence Construction are professionals in the repairs of all types the basements, but especially […]